Petty Things That Annoy and Enrage

I spend probably 5 hours a week dealing with trivial things that I might be better off ignoring. For example, the 3 muhly grass plugs I ordered from Springhill Nursery.

The order was placed and paid for on April 22nd. I received a confirmation of payment with an estimated shipping date of April 29th.

I emailed a photo of the plants and referenced their long transit time as the likely reason for their demise. I was told by reply email that the plants were suffering from transit shock and would no doubt "revive with proper care." I am a wildly optimistic person by nature, but even I had scant hope for a miraculous resurrection.

It is my sad task to report, these 3 weeks later, that the plants have failed to magically spring back to life.

I finally resorted to Assertiveness Level 1 and called Springhill to ask for a return shipping label so I could send the deceased plants back to them. This would allow me to inform my credit card company that I had returned the merchandise, and I'd be able to charge back the cost of the plants to the nursery.

At this point, the customer service rep assured me that a full refund had been issued. When I questioned the truth of this, on the grounds that no refund had appeared on me credit card, he checked again and came back with assurances that NOW the refund had been processed.

The amount at stake here is $27.42 I KNOW I should have just written it off instead of spending a total of over an hour working on a refund. I'm ever a sucker for the Principle of the Thing. 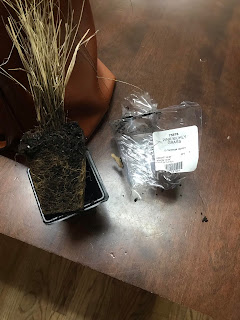 Posted by Barb-Central Texas at 3:42 PM No comments:

We used this for the subfloor in the house we built on a 1970's mobile home chassis. We had a long period of rain after the subfloor was installed but before the house was dried in. This material performed well, remained almost perfectly flat and well-aligned. Only had to be sanded in a couple of places. It holds screws firmly in place to prevent squeaky floors. 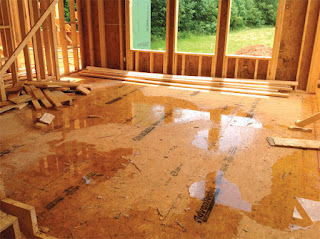 The rodent filter was built on a barren patch of earth that had been a driveway. I wondered if anything would grow there. To plant trees and shrubs I had to use a mattock to dig through the thick layer of  caliche. But it's turned out to be quite fertile. The area around the rodent filter is now wonderfully shady and fragrant. 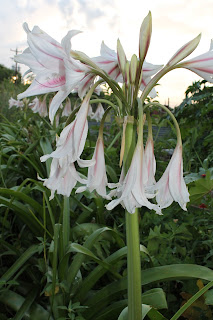 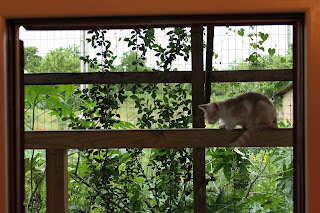 Posted by Barb-Central Texas at 9:25 PM No comments:

My current house is a delapidated mobile home I bought for $800, gutted, and am completely re-doing the inside using lumber from the old house and other scrounged and beautiful materials.

I'm only at the land three days a week and was having terrible problems with rats and mice getting between the walls, chewing up wiring and generally making a mess and even getting into the house and chewing up rugs and so forth. Very destructive little creatures. I didn't want to poison them, and I hate traps that sometimes maim but don't kill. So I built a pole barn around the mobile home. 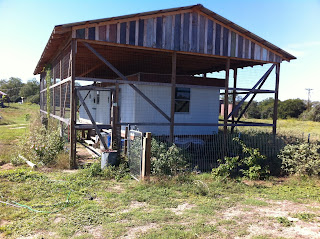 provides shade so the mobile home stays relatively cool in summer; it provides a roof to catch rainwater; I can put greenhouse plastic on the north side in winter to keep out the cold wind. But the best thing is that I put wire on the outside of the pole barn and keep cats inside it, half of whom are polydactyl which (I believe, having watched them in action) makes them better at catching rodents. Many dung beetles moved in to take care of the cat poop, and I've seen no sign of rodents in or near my home, or for that matter unpleasant bugs. Fortunately, I am also very fond of cats and very much like to sit in front of a fire with a purring cat on my lap. I'm going to try to attach a photo of the rodent filter.
Posted by Barb-Central Texas at 11:09 PM No comments:

[1] Satellite observations reveal a greening of the globe over recent decades. The role in this greening of the ‘CO2 fertilization’ effect – the enhancement of photosynthesis due to rising CO2 levels – is yet to be established. The direct CO2 effect on vegetation should be most clearly expressed in warm, arid environments where water is the dominant limit to vegetation growth. Using gas exchange theory, we predict that the 14% increase in atmospheric CO2 (1982–2010) led to a 5 to 10% increase in green foliage cover in warm, arid environments. Satellite observations, analysed to remove the effect of variations in rainfall, show that cover across these environments has increased by 11%. Our results confirm that the anticipated CO2 fertilization effect is occurring alongside ongoing anthropogenic perturbations to the carbon cycle and that the fertilisation effect is now a significant land surface process.


Posted by Barb-Central Texas at 9:02 AM No comments:

I am listening to an audio book about the 1840's famine in Ireland (The Graves Are Walking by John Kelly), so this article caught my attention:


An international team of scientists reveals that a unique strain of potato blight they call HERB-1 triggered the Irish potato famine of the mid-19th century
It is the first time scientists have decoded the genome of a plant pathogen and its plant host from dried herbarium samples. This opens up a new area of research to understand how pathogens evolve and how human activity impacts the spread of plant disease.
Phytophthora infestans changed the course of history. Even today, the Irish population has still not recovered to pre-famine levels. “We have finally discovered the identity of the exact strain that caused all this havoc”, says Hernán Burbano from the Max Planck Institute for Developmental Biology.
For research to be published in eLife, a team of molecular biologists from Europe and the US reconstructed the spread of the potato blight pathogen from dried plants. Although these were 170 to 120 years old, they were found to have many intact pieces of DNA.
“Herbaria represent a rich and untapped source from which we can learn a tremendous amount about the historical distribution of plants and their pests – and also about the history of the people who grew these plants,” according to Kentaro Yoshida from The Sainsbury Laboratory in Norwich.
The researchers examined the historical spread of the fungus-like oomycete Phytophthora infestans, known as the Irish potato famine pathogen. A strain called US-1 was long thought to have been the cause of the fatal outbreak. The current study concludes that a strain new to science was responsible. While more closely related to the US-1 strain than to other modern strains, it is unique. “Both strains seem to have separated from each other only years before the first major outbreak in Europe,” says Burbano.
The researchers compared the historic samples with modern strains from Europe, Africa and the Americas as well as two closely related Phytophthora species. The scientists were able to estimate with confidence when the various Phytophthora strains diverged from each other during evolutionary time. The HERB-1 strain ofPhytophthora infestans likely emerged in the early 1800s and continued its global conquest throughout the 19th century. Only in the twentieth century, after new potato varieties were introduced, was HERB-1 replaced by anotherPhytophthora infestans strain, US-1.
The scientists found several connections with historic events. The first contact between Europeans and Americans in Mexico in the sixteenth century coincides with a remarkable increase in the genetic diversity ofPhytophthora. The social upheaval during that time may have led to a spread of the pathogen from its center of origin in Toluca Valley, Mexico. This in turn would have accelerated its evolution.
The international team came to these conclusions after deciphering the entire genomes of 11 historical samples of Phytophthora infestans from potato leaves collected over more than 50 years. These came from Ireland, the UK, Europe and North America and had been preserved in the herbaria of the Botanical State Collection Munich and the Kew Gardens in London.
“Both herbaria placed a great deal of confidence in our abilities and were very generous in providing the dried plants,” said Marco Thines from the Senckenberg Museum and Goethe University in Frankfurt, one of the co-authors of this study. “The degree of DNA preservation in the herbarium samples really surprised us,” adds Johannes Krause from the University of Tübingen, another co-author. Because of the remarkable DNA quality and quantity in the herbarium samples, the research team could evaluate the entire genome of Phytophthora infestans and its host, the potato, within just a few weeks.
Crop breeding methods may impact on the evolution of pathogens. This study directly documents the effect of plant breeding on the genetic makeup of a pathogen.
“Perhaps this strain became extinct when the first resistant potato varieties were bred at the beginning of the twentieth century,” speculates Yoshida. “What is for certain is that these findings will greatly help us to understand the dynamics of emerging pathogens. This type of work paves the way for the discovery of many more treasures of knowledge hidden in herbaria.”

Posted by Barb-Central Texas at 1:45 PM No comments: