http://www.architectlines.com/solar-power-panels-solar-shingles/
Posted by Barb-Central Texas at 10:02 PM 9 comments: Links to this post

Protecting the Home From Wildfire

We've had a respite from worries about brush and forest fires over the last few weeks, with cooler temperatures and rain. My Australian husband and I have been keeping up with the bush fire situation in Australia, which reminds me that I need to fire-proof my country place to the best of my ability, before weather conditions get hot and dry again, as they undoubtedly will.

The closest I've come to a forest fire was in 1996 when an electric wire fell and started a fire at Altamira. Fortunately, I saw it happen, and The McMahan Volunteer Fire Dept got there within a few minutes (which reminds me, I need to send in a donation to them), but not before it got large enough to be very scary. The most frightening thing, to me, was seeing the fire jump from tree top to tree top. Pine trees were the very worst. There would be a tree standing in relatively isolation, say, 15 feet away from its nearest neighbor, looking just like it always had. Then, suddenly, explosively, it would burst into flame -- the whole canopy all at once.

I have planted 3 pine trees at the Berry Farm and a few junipers, mainly because the grasshoppers were killing everything else I tried to plant. Both of these species burn readily -- I've observed that the pine is especially bad. Dead juniper wood and leaves burn easily, but green branches not so much, at least in my experience. There are no trees at all within 45 feet of my house, but there are 2 large old junipers in the yard of the old homestead (I need to tear the old homestead down, because it is beyond redemption), and I planted a few more near the pole barn, as a wind break.

I'm wondering ... if I keep all the lower branches pruned from the large old trees and keep the young junipers cut low, would it be OK to keep them? Or should I remove them? Or should I let them grow tall and keep the lower branches trimmed back? It's the leaves and small branches that burn, not the trunks. It's not all that easy to get a cedar log to burn. I used to throw a cedar log on my fire every evening, for the fragrance. I'd always need to get the fire going with some other kind of wood first. Some other windbreak possibilities are: native plum thicket, yaupon holly (which I've heard burns readily but which, in my experience, is not nearly as likely to burn as pine), Japanese ligustrum (a very well adapted exotic which, I have to say, the grasshoppers love to eat), Chinese photinia (a well-adapted exotic), Russian olive or eleagnus (a well adapted exotic that produces berries in cooler climates, but it tends not to fruit in central Texas), and hardy olive trees, which tend to form thickets and do very well in my garden in San Antonio but which are frost sensitive below 25 degrees F.


Unfavorable tree don’t have to be removed, just keep branches pruned to 10 feet about the ground
Firewise Plant Recommendations for your Region


I do like the junipers for their berries and fragrant wood. When my father was lying on his death bed, I took a juniper branch to his bedside on Christmas day and lit it on fire in a ceramic container (over my mother's strenuous protests). My father was quite moved by this. He said the fragrance of the burning juniper took him back to his youth when he and his father used to go on camping trips into the Hill Country west of Austin. He said it was one the of the nicest Christmas gifts he'd ever received.

Finally, in support of the widely maligned juniper, a quote from Edward Abbey:

“The fire. The odor of burning juniper is the sweetest fragrance on the face of the earth, in my honest judgment; I doubt if all the smoking censers of Dante's paradise could equal it. One breath of juniper smoke, like the perfume of sagebrush after rain, evokes in magical catalysis, like certain music, the space and light and clarity and piercing strangeness of the American West. Long may it burn.”

A reminder from a couple of years ago, when I watched helplessly as the Bastrop fire approached Altamira: Wildfires in Texas

ARC—Animal Road Crossing—is an interdisciplinary partnership working to facilitate new thinking, new methods, new materials and new solutions for wildlife crossing structures.
Our primary goal is to ensure safe passage for both humans and animals on and across our roads. We do this through supporting the study, design and construction of wildlife crossing structures throughout North America.
ARC builds bridges in other important ways: We reconnect landscapes and wildlife habitats that have been split apart by our road systems; we reacquaint people and wildlife, helping drivers to be aware of the habitats our roads interrupt and the animals that use these places; and through these strategies, we reaffirm the need for humans and animals to coexist in the landscapes we call home.
Situated at the intersection of science and design, ARC is a forum for creative collaborations and surprising synergies. 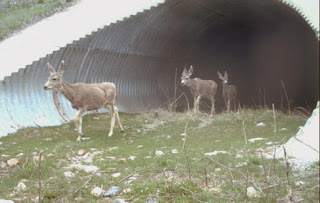 I have not read extensively on this. I wonder if organizations such as ARC place attractive plants close to the animal crossing bridges and culverts, to encourage the animals to use them.
There are large herds of deer near my country place. At night, I don't like to go over 45 mph on the stretch of road between my place and the Interstate 9 miles away.
Posted by Barb-Central Texas at 5:44 PM 1 comment: Links to this post