I love being in different places, but I hate riding in cars, planes, and buses. Trains are marginally better, but not much. Since I don't have time these days to travel by foot or bicycle, I mostly limit my traveling to the relatively short trip between San Antonio and my country place.

This month has been unusual, as I traveled to New York, NY and Gonzales, TX. The NYC trip was mostly for business, but my daughter and future son-in-law went with me, and there was time for enjoying the city in the evenings. We rented an apartment not far from where my cousin lives, and she introduced us to some pleasant restaurants. One of our favorites is Zen Palate http://www.zenpalate.com/ . We spent one evening at a Fraunces Tavern Museum evening lecture (Trudy Eden spoke on the political effects of the 18th century American diet), followed with a private tour conducted by Fred Cookinham (yeah, I know it sounds as though we were fixated on food and cooking that evening). Fred made New Amsterdam and early New York come alive for us. (I highly recommend Fred's tours; I definitely plan to do more in the future http://indepthwalkingtours.com/ ) 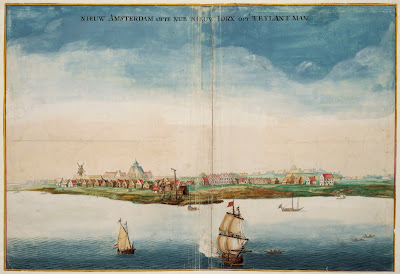 I wondered what trees originally grew on Manhattan Island, and Fred suggested that I go up to Inwood Hill Park, which is a chunk of relatively undeveloped Manhattan Island. Sounded like a good idea, so we went to Inwood Hill Park the next day. The terrain is incredibly rugged, with huge gouges and boulders left by glaciers. It's amazing to think that the whole island was once like that. The photos below were taken by my future son-in-law, Ryan Becker. 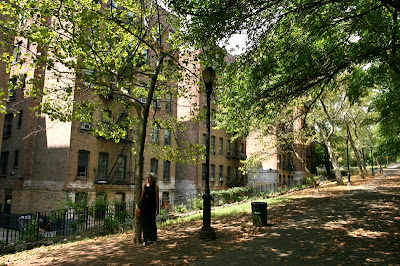 photo by Ryan Becker
I love the buildings of New York, but there are so many wonderful photos of them, I didn't think I had anything to add. Instead, I wanted photos of places you don't see all the time, like the park above, near 92nd St and the farmer's market below. 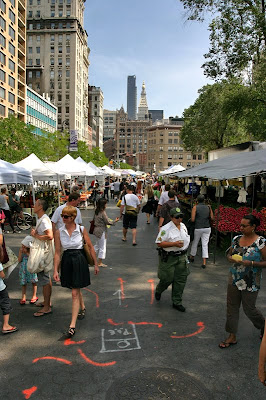 photo by Ryan Becker
And one of the gardens at The Cloisters: 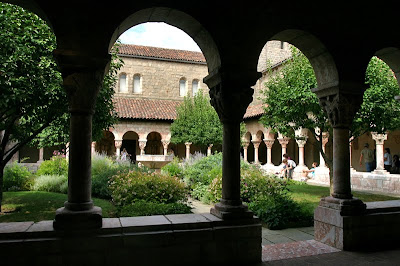 photo by Ryan Becker
Gonzales, Texas is just down the road from my country place, but I had never been there before today. I went there to visit Discovery Architectural Antique. My husband and I need to replace the doors that someone stole from our home in San Antonio. http://www.discoverys.com/
Gonzales is famous as the location of the first battle of the Texas War of Independence on October 2, 1835. It's said that the Mexican government had given the settlers in Gonzales a small cannon to use as protection against Comanche warriors. Prior to October, 1835, the Texas settlers ("Texians") had begun to protest against increasing federal control over their lives. The Mexican government, no doubt foreseeing the need for the use of force against the settlers, asked the settlers of Gonzales to return the cannon, and sent around 100 dragoons (light cavalry) to retrieve it. The Texians were determined not to give up the Cannon and rallied under a white flag that bore a picture of a cannon and the words, "Come and Take It."  I saw "Come and Take It" signs on several buildings when I was in Gonzales today. 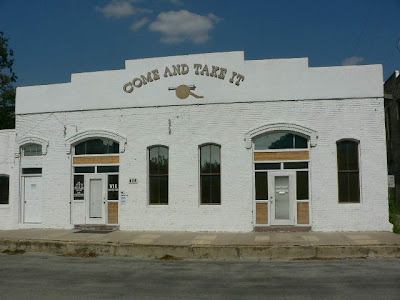 As I was driving around looking for the architectural antiques store, I noticed that all the streets bear the names of saints: St Andrew, St Francis, St George, etc. There are large squares of land kept nicely mowed, but I didn't see anyone using them. In fact, the place was a bit like a ghost town. Other than a kid on a skateboard, I was the only person walking around the town. I wondered what it would feel like to live in Gonzales, and what it was like in the early 1900's when, judging by the fancy buildings and mansions, it must have been a far busier place than it is now. What did it smell like then? Today, it smelled mostly like hot asphalt. There was a building with a sign that said, "Alcalde Hotel." During Spanish and Mexican colonial days, an alcalde was something like a city magistrate, who also acted as judge when there were disputes among the residents 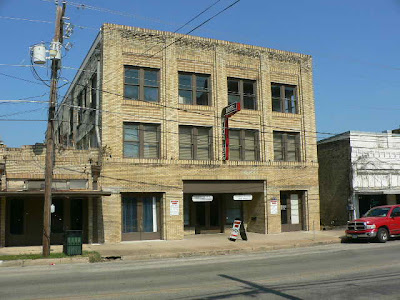 .
The Alcalde Hotel is clearly no longer used as lodging for travelers. There are, however, a couple of motels in Gonzales and at least two pleasant looking bed & breakfasts. The sidewalks have rings at the curb, for tying up one's horse. 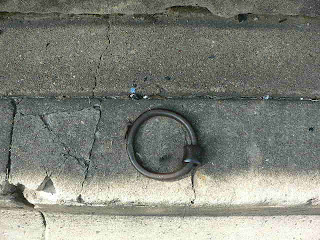 I'd like to go back someday, when the weather is not as hot as it was today, and wander around.
Here's a very enticing mansion that was smothered in vegetation, with No Trespassing signs all along the stone wall that surrounds its grounds. You can just see the chimneys and a bit of the roof. 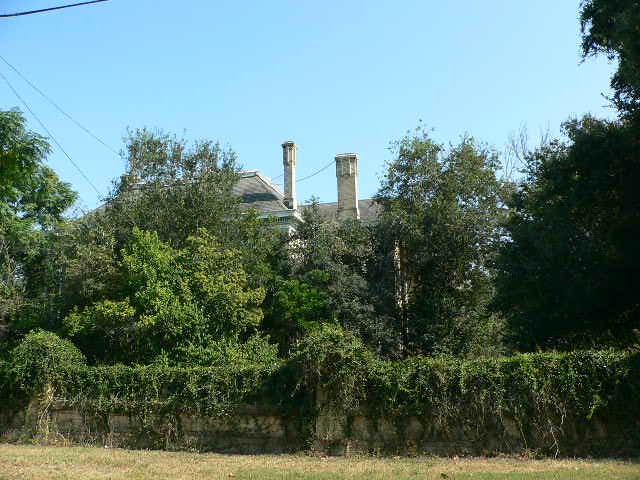 On the way back to the Berry Farm, I drove through Palmetto State Park. Very pretty place with the San Marcos River flowing through it.
Posted by Barb-Central Texas at 10:26 PM 3 comments: Links to this post

Trees on My Land - Prickly Ash 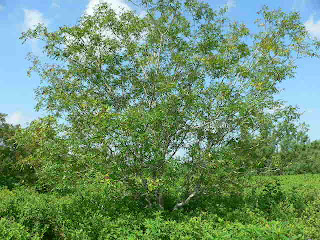 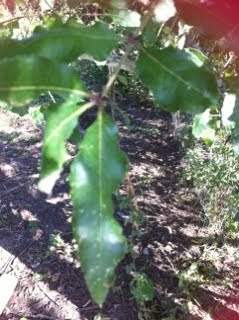 The trees on my land are attractive small trees whose bark is covered with small spines that hurt if you grasp a branch or truck. It is the most common tree on the east, sandiest part of the land. In addition to the prickly bark, these trees have leave that tingle on the tongue when you chew them. One name for this tree is "toothache plant."
It is said to be useful to treat tooth and gum disease and as a poultice for sore muscles. I have never tried it. The tree is also used as a home by birds. They are pretty trees, most of which I will keep.
Posted by Barb-Central Texas at 5:03 PM 1 comment: Links to this post

Trees on My Land - Slippery Elm 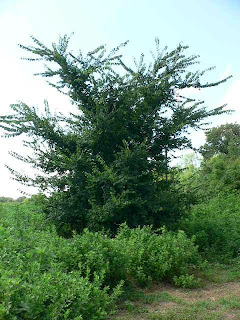 Slippery Elm Tree
When I bought the Berry Farm, I got a living pharmacy in addition to a garden site.

I'll talk about the trees first, starting with Ulmus rubra, aka Slippery Elm. According to Trees, Shrubs and Woody Vines of the Southwest by Robert A. Vines,

elm bark ... contains a mucilaginous substance forming a jelly when mixed with water. A warm infusion was used as a treatment of coughs and diarrhea by early settlers. It was prepared by stirring an ounce of powdered bark in a pint of hot water. Somtimes the strips of elm bark prevented fat from becoming rancid, and settlers sometimes cooked bear fat with the bark.


I see lots of it for sale on the Internet. It seems to be an ingredient in many cough drops.

Derived from the inner bark of the tree. Slippery elm has been used historically for gastrointestinal disorders, skin ulcers or abscesses, cancers, cough, fevers, and inflammation. The primary constituent is mucilage, which is thought to account for the demulcent effects. To date, no human or animal studies have been performed to evaluate the efficacy of any proposed claims. Toxicity of slippery elm is low based upon chemical components. No adverse reactions or drug interactions are reported in the literature. Slippery elm appears to be safe for coughs and minor gastrointestinal complaints, but it should not be used to treat severe conditions such as cancer or bronchitis.


I have never tried it, so I cannot say anything about it from personal experience. I will certainly keep the trees here. 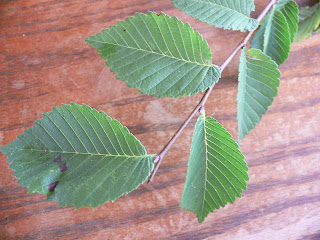 Posted by Barb-Central Texas at 3:22 PM No comments: Links to this post

The concept of the gabion has been around for a long time, I don't suppose anyone alive today knows for sure how long. I have read that they were used in some form by the ancient Egyptians to retain the banks of the Nile. The idea is to enclose rocks or rubble within a cage made of light-weight but strong material. Most of the gabions shown on the Internet have wire mesh cages, although I've found a few with fabric cages.

The most common use of gabions seems to be as retaining walls, such as this one, made by Gilbert Geosynthetics. However, gabions can also be used as walls. There's an apartment building  in San Antonio a couple of blocks from where we live with a gabion garden wall. 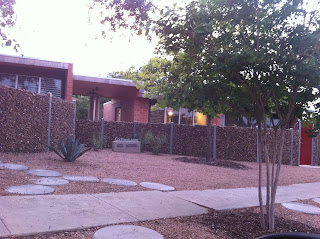 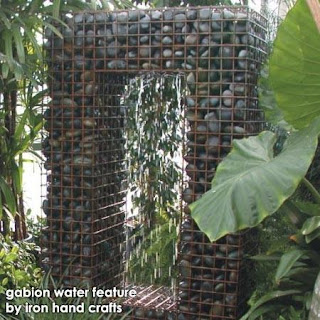 So this weekend I've been wondering what to use to build a small retaining wall in my garden. Most of the plants I have in the Berry Farm garden can tolerate dry soil, but I have a place next to the trailer that is shady, and I've planted moisture-loving plants there, such as hoja santa and spearmint and taro. The chickens love to scratch in moist soil, and they've scratched bare some of the taro roots. What to use to hold up the soil? There are no rocks around here.

So yesterday I was cleaning out my storage container (this is an on-going project) and when I reached up on top of a stack of boxes to move a plastic box down, the lid of the plastic box popped open, and hundreds of sea shells fell out. My father was a collector: stamps, coins, sea shells. His stamp and coin collections were very valuable, and my mother sold them after he died, for Big Bux. But no one was interested in the sea shells.  I kept them for sentimental reasons, although I have never shared my father's enthusiasm for learning about them. See, he didn't just save pretty shells; he found out who had lived in each shell, where the creature fit into the food web, and so forth. Each shell was in a box, with the creature's botanical name -- Anadana lienosa, Cardita floridana, Barnea truncata, and so forth. I inherited (or learned?) his insatiable curiosity about the way things fit together in the world, but I've always been more interested in plants.

Anyhow, I kept my father's sea shell collection, but yesterday when it fell, all the shells came out of their little boxes and mixed together. The results of my father's careful sorting and identifying were lying there in ruin. It was getting dark, so I left the mess there on the floor of the shipping container over night.

This morning, I had an idea. There was no way I was going to get those hundreds of shells sorted again, so ... I would use them as filler for a gabion retaining wall for the taro plant. The lovely shells will be preserved. If I ever develop an interest in sorting and identifying them, I can. Meanwhile, they are serving a useful purpose.

So I made a basket from poultry wire, put in a couple of layers of rubble first, then placed the shells at the top. It's not terribly unattractive, and I think it will work fine. 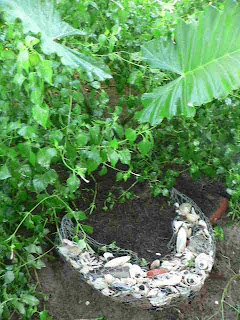 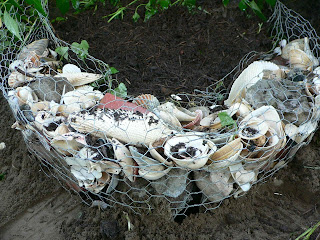 Posted by Barb-Central Texas at 2:27 PM No comments: Links to this post